On Sunday, I met up with Brendan from Plymouth MA, in Manhattan NY.  Since he is going back to Dreamakers Kustoms for some more work, I decided to help him out with the drive there.  Otherwise, it would have been 9 hours each way for him since you have to go south then north west to get there.

It felt good having a F50 Q45 back in my driveway.  All the neighbors asked if I painted it silver.

When it comes back from the shop, he is going to be the new “WidebodyQ”

and I am fine with that.  Before we start another Liberty Garage on this car,  let me tell you what it was like going up there since that is a story in its self.

The body shop, Dreamakers Kustoms, is 200 miles away from my house and that’s a long drive.  It is even longer when you have no navigation, cup holders, a leaking rear bag w/ no gauges and no cd’s.  Since you have to cross 3 states, you have to keep looking for new radio stations if you don’t have cd’s/ipod/sirus radio as the ones you were listening to for the last hour no longer work.

Imagine having to search through the radio for stations while having a switch box, head-unit, easy pass, hand written directions and a drink all on your lap while driving a slammed car.  Even country music is better than hearing static (Nate, now you know why loud 80’s rock was playing in my car when I called). There are also 30mm spacers up front which appeared to have not been hub centric because the vibration in the wheel was very noticeable.  For a long stretch, it starts pouring rain and I forgot to mention one of his headlights was out.  For anyone who been up there, you know that there are always showers going up by the mountains.  They don’t last too long but come down really hard.  The wipers sucked so I was only going 15mph at one point with the hazards on.  I thought the ride couldn’t get worse.

I’m not here to dog on the car, it is in between an audio install, new wheels, body work and interior.  This is why it is the way it is.  I am just telling you about why it was such a great trip.

Not having driven my Q in a while, I really forgot how much gas this thing guzzles (since I daily a 4 cylinder 32mpg VW CC).  All of a sudden I am driving and the vibration shifts to the rear and it gets real bad.  First thought, maybe the lug nut came loose since it didn’t feel like a blow out.  I get to a gas station, and clearly see that its a flat.  The 30 series rear tires are so thin that you often can’t tell when one goes down.  I look under the car and it appeared to look alright (since the section that was visible was the only good part of the tire showing.)  I attempt to fill up the tire with air hoping that it just lost the bead but its not moving anywhere.  It’s popped!

I get to his sick trunk and take a deep breath before I open it hoping that I am not stuck in West Bubafuck, with no tire.  Luckily, he had one.

My first thought after removing the popped tire was, this looks like an alien crop circle.  The Tire VooDoo was trying to send me a message in hieroglyphics.  I used to pop tires frequently in my Q but never seen one like this.  I got 2 hands full of cuts thanks to the sharp exposed metal, while removing the wheel from the car.

I am now off my route and on a different road.  I have no navigation, just pretty tree’s as Bob Ross used to say.  My sense of direction is horrible since I depend on navi to go everywhere.  The 4 hour trip now took me 8.  I was scared that the bus would leave and I had a pre-paid ticket.  It was getting to the point where I didn’t even care about the ticket, I was just hoping DK would stay open for me to drop off the car and they did. 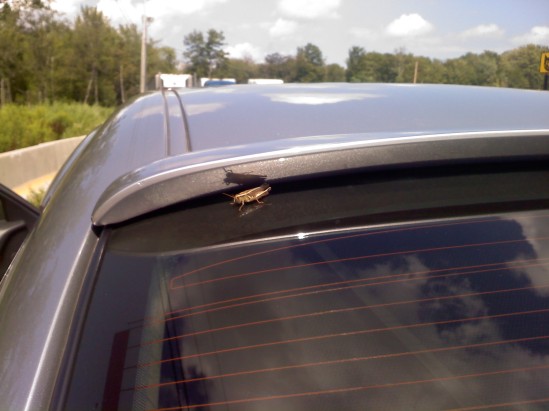 I wonder how long that bug was on the car for?

The ride back involved me taking a bus in Binghamton which is the town over from the shop.  I’m at the bus terminal waiting for my ride, the Megabus to show up but it never did.  In NYC, all the Megabus’ have bright blue and yellow vinyl with a big asian face on the side. 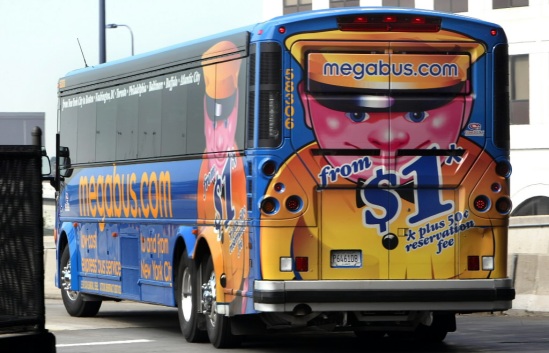 Up in Binghamton, they team up with Coach USA and use theirs.  I did not know that nor did any workers whom I asked, tell me that.  There were 6 bus’ there all from different companies, none read megabus.

*Not the actual bus I took but its the same thing.  As you can see, it doesn’t look anything like the Megabus, read mega bus along the side, nor does it display “Megabus” on the LED sign on top.

So it leaves and I had the worst customer service ever while trying to hop on another one.  They would not allow me on and seemed very confused when I went through the whole situation with them.  I called different numbers and nothing.  I’m not a crook, I had a receipt that I paid, all I wanted was a ride back on what is usually a half empty bus.  After a 2-3 hour battle, I paid the $40 a second time on a bus that was 33% full at best.  F*ck megabus, they always crash killing a bunch of people anyway.  Use Grey Hound or Peter Pan instead.  There was the story to my 15 hour day.

The whole trip there definitely brought back memories of frustration that I had a long the way in my build.  Hopefully Brendan’s car can come back better than before and can dodge issues.  From our convo on Sunday, it seems like he had his fair share of avoidable and non avoidable problems while being a good sport about them.  In this scene, you just learn to deal with them and think that it could have been worse.